Home Europe Man City ‘ahead’ of competition and ‘ready to increase initial offer’ for...
SHARE

It’s very rare for the Italian media to all agree on something, but they magically manage to do it on Tuesday when looking at the Kalidou Koulibaly saga.

While the details differ ever so slightly from publication to publication, the general consensus is that Manchester City will come back with an improved offer for the Senegalese defender.

Il Mattino, Gazzetta dello Sport and Corriere dello Sport all hint at it with varying degrees of conviction, and we’ll start with the first on the list.

The local Naples newspaper have a big transfer roundup of the what their club is planning on doing this summer, and while the big topic might be Allan, Koulibaly gets a mention too.

It’s said the 29-year-old ‘continues to represent the number one goal for Manchester City where the Sheikh is ready to increase the initial offer of €70m to convince [Aurelio] De Laurentiis’.

Moving onto Gazzetta, the pink outlet state the Premier League club ‘seem intent on bringing the offer for Koulibaly up to €70m’ and ‘who knows how long De Laurentiis will be able to hold out?’. 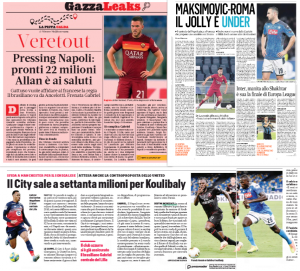 As for Corriere in all of this, they believe ‘we are entering a week that can become decisive’, explaining that City are ‘ahead’ of the competition, mainly Manchester United, with their €70m offer (which included bonuses).

That was deemed ‘insufficient’ by De Laurentiis, but ‘there is a willingness’ from the Cityzens’ end to ‘plan a deal’ i.e. come back with a second attempt.

As you can see, they all say the same thing, and it’s just when it comes to the figures that things differ a bit.

Either way, Manchester City are planning to return with another bid for Koulibaly, and they’ll be hoping this next one will be enough.