Manchester City and Sporting are reportedly sorting the final details of Pedro Porro’s transfer to the Portuguese side.

The latest update from newspaper A Bola today claims that there’s already an agreement for the right-back to be loaned for two years.

The clubs are now finalising the discussion regarding an option to buy, which has been the bigger issue in these final stages of negotiation.

A Bola now claims that Sporting should have the chance to sign Porro on a permanent deal in 2022 for between €7m and €9m. The rest of the deal is considered to be pretty much done, with all other terms agreed. 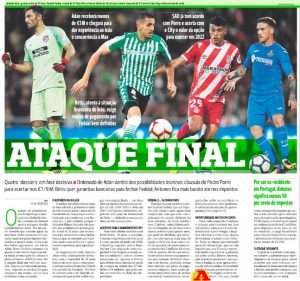 Manchester City spent €12m to sign Pedro Porro from Girona in the summer of 2019, but the player didn’t have a chance to stay in England. He was loaned back to Spain, where he spent a year at Real Valladolid, making 15 appearances there.

Initial reports from Portugal said Pep Guardiola wouldn’t like to include a buying option in the deal, since he’d still want to count on Porro at Manchester City. But now it seems they’re letting him go for good if necessary.