The Reds came close to lifting the trophy a year before, but they suffered a 3-1 defeat at the hands of Real Madrid in the final May 2018.

Sergio Ramos collided with Karius at the start of the second half in Kiev and, minutes later, an error from the 26-year-old saw Karim Benzema put the Spanish capital club in front. The keeper was also at fault for Real Madrid’s third goal.

Just days after the final in Kiev, a specialist at Boston and Massachusetts General Hospital confirmed the goalkeeper’s performance could have been impacted after suffering a concussion during the game against Real Madrid.

After the final, Karius was subjected to online abuse, and speaking to SportBild, the keeper admitted he should have dealt the situation in a different manner.

“Believe me, I’ve learned a lot from that! In retrospect, I should have dealt with it more aggressively in public,” he said.

“I had a concussion after a blow from Sergio Ramos, which restricted my spatial vision. This was unequivocally ascertained in a detailed study by one of the world’s leading brain specialists.

“At first, I was happy to know what was going on in this game. I didn’t want to make it public myself. When the result was released, there was a lot of malice and insult, often well below the belt. I never used it as an excuse. But when people make fun of someone who has badly injured their head, I have no understanding.”

Karius even suggested that his display in the Champions League final defeat has erased his previous good performances.

“When I was just 24, I was in the Champions League final. Otherwise only Manuel Neuer and Marc-André ter Stegen were among the active German goalkeepers in the final,” Karius explained.

“But my share of it with all my shows and good performances before was suddenly no longer present. The reactions were over the top and disrespectful. Above all that it is drawn out in this way. Errors are measured with different, even abnormal, dimensions and are not assessed fairly.

“We players face extreme hostility on the internet. If you read every message, you wouldn’t be able to sleep for two days. It’s insane what people take out under the guise of anonymity, badly insulting others, discriminating against them and then becoming racist.

“You can’t blame fans if they whistle a player. You pay admission [fee] and have the right to be dissatisfied. A professional has to endure that. If there are personal insults or death threats, the line is then crossed.

“There were some of them [death threats]. But I can’t take that seriously. These are people who write anonymously and don’t even show their faces in their profiles.” 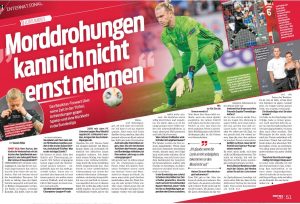 Karius has also thanked his partner Sophia Thomalla for her support.

“She is an extremely strong woman, never afraid to speak her mind. It’s nice when you have someone you can rely on. She travels a lot, but we see each other often. No matter where we are, we always know that one person supports the other one hundred percent,” he added.