Following the club’s relegation to the Championship last season, the 27-year-old now talks about their focus in getting back to the Premier League, claiming the Craven Cottage side deserve to be there.

“Clearly our main focus is the promotion. Fulham are a Premier League team and that’s clear,” Cavaleiro told Record.

“However, the Championship is very competitive and so we, as a team, have to be equally competitive to be able to reach the goal.” 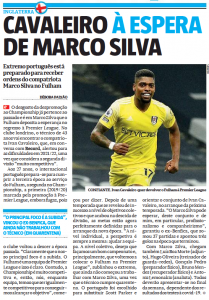 The player only had three goals and made no assists in his 37 appearances for the Whites last season. Now he claims to be focused to help the team to get better results.

“At an individual level, the perspective is always the same: to help the team. At the collective level, I hope that we have a good competition and, above all, that we put Fulham back in the Premier League.”

Cavaleiro was also asked about the arrival of his compatriot Marco Silva for the manager role, who is arriving with a Portuguese staff and the winger will certainly get a good communication this season.

“Marco Silva can expect, from this group and from me, in particular, professionalism and companionship.”

Marco Silva and his staff are expected to join Fulham’s squad by the end of the week, as long as all the Covid protocols go as planned.

Following the pre-season, the Cottagers are making their debut in the Championship at home playing Middlesbrough on the 8th of August.