Four Portuguese newspapers have stories about Reading’s chase for the Vitória Guimarães manager Luís Castro today, each one with a different take.

The outlet who really confirms the latest rumours is Record. They say the Royals really have officials in Portugal trying to close a deal and pay the €1m release clause which protects the manager and his staff.

However, Vitória are still to confirm the approach. Record, O Jogo and Jornal de Notícias all say that the Portuguese club knows nothing about the offer, and couldn’t tell them anything about a negotiation.

The word in the local press is that Vitória wouldn’t like to lose their boss, although the money would be pretty important for the club’s financial recovery. 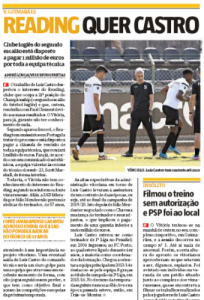 On the other hand, A Bola says that the salary of €1m per season offered by Reading sounds pretty attractive for Castro, since the only two clubs in Portugal who pay that much are Benfica and Porto.

Some outlets like O Jogo didn’t know about the existence of the €1m release clause, and were able to confirm it today.

So it sounds like Reading just need to pay that amount and they can take Castro and his staff to England.