After a year back out on loan at Saint-Etienne, William Saliba is now a full Arsenal player.

Signed from the Ligue 1 club at a young age, the Frenchman was allowed to stay put for an extra season to get some more experience under his belt, which he did, albeit sporadically as he had to deal with a few injuries.

With his loan now come to an end, he will turn his attention to next season with the Gunners, where he will be hoping to immediately be a part of Mikel Arteta’s first-team plans, such is the state of their defence of late.

Even if he is sad about leaving Saint-Etienne, to whom he owes a lot, the 19-year-old is ready for the next step in his career, telling L’Equipe as much in an interview on Friday. 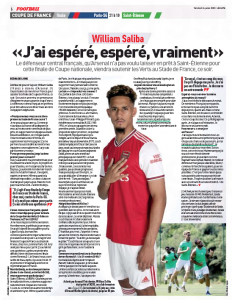 He said: “I immediately got a good feeling with Arsenal. Many French players have gone through there. Arsenal haven’t been in the best form over the past three, four years, but like Saint-Etienne, their badge, their history and the fans give me a desire. Arsenal, it was love at first sight. What they exude talks to me. I didn’t hesitate. I’m discovering a new world”.

Bought for just under €30m last year, the young defender put pen to paper on a five-year contract, which shows how much the Gunners believe in him going forward.

Now, he just needs to repay them on the pitch, and a good preseason should go a long way to convincing both Arteta and the fans he wasn’t simply a gamble.