In September, Sheffield United agreed a deal to sign Ismaila Coulibaly from Norwegian side Sarpsborg 08.

The Blades reportedly offered the midfielder a five-year contract and then immediately loaned him out to Belgian side K Beerschot VA for three seasons.

The Mali U20 international played alongside Club Brugge’s Krépin Diatta at Sarpsborg 08, and it was believed the 19-year-old would join the Belgian champions. However, he ended up at Beerschot.

Gazet van Antwerpen had an opportunity to interview the Sheffield United owned player, and asked if there a possibility to join Club Brugge in the last window.

“(Nods) Yes, Club Brugge talked to my agent. A lot of people thought that I would go there, even Krépin was convinced of that. But in the end, this [Beerschot] project was better,” Coulibaly said.

“I have more chance of playing time at Beerschot and the Belgian league is still one level higher than the Norwegian one, but at the same time I am already certain that I will play for a Premier League club in three years. This is a childhood dream come true. Nice to have in the back of my mind.” 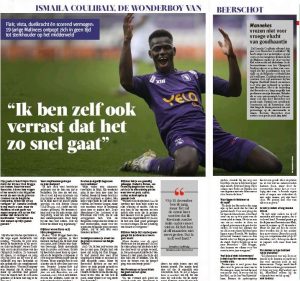 The Premier League side and Beerschot have the same owners and that is likely to have made it easier for the two clubs to come to an agreement for the long, but still temporary, deal for the teenager.

Coulibaly has been operating in the centre of the pitch for the Jupiler Pro League side and already has three goals in six league appearances this season.