Arriving on loan in the January market, there was a great deal of fuss around the Manchester United player’s arrival. It was unlikely that he’d live up to the hype Sevilla had surrounded him with, but his contribution has been disappointing even without that.

Brought off before 60 minutes against Real Sociedad at the weekend, Martial was whistled by some supporters.

Marca go with a headline calling him ‘the lost star’. They say he ‘doesn’t quite fit into the system’ at his loan club, and was left ‘angry’ after the early substitution.

The Manchester United player pushed hard to get his move to the Spanish club in the winter window, and has been left ‘frustrated’ with his situation. 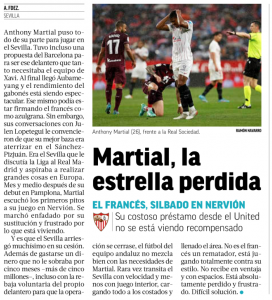 Sevilla aren’t thrilled either, having invested a relatively high amount into the deal.

Marca send some blame to the La Liga side, suggesting the current style doesn’t fit Martial well, despite the Frenchman being assured he’d be an important player.

The Spanish newspaper say it’s down to Julen Lopetegui to get more out of the attacker in the coming weeks.