Home Europe ‘He looks around’ – Tottenham an option for player as he considers...
SHARE

Tottenham remain an option for Napoli’s Lorenzo Insigne next summer, although he is yet to properly look at them as a destination.

That’s according to Corriere del Mezzogiorno, who say the forward would prefer to stay in Italy if he is to leave Naples.

Insigne is out of contract with Napoli next summer, and despite the Serie A side being keen to renew him and offering terms, he is yet to accept.

The major stumbling block is wages, with Napoli so far failing to offer the Italian a figure that will make him sit down and sign on the dotted line.

As such, he could negotiate with clubs around Europe in January about a free transfer next summer, and Tottenham are one of those to be linked.

They were named as suitors regularly throughout the summer, although Italian journalist Ciro Venerato claimed that Fabio Paratici had insisted that wasn’t the case.

CDM now confirm that Insigne is considering his options and that ‘he looks around’ at what would be available to him, including Spurs.

They are said to have an ‘interest for him’, something his agent recently confirmed, although they are a ‘distant destination’ at this point in time. 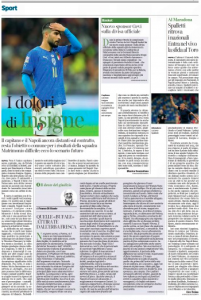 In fact, the offer has ‘never been taken into consideration’ up to this point, with Insigne preferring to stay in Italy if he can.

Ideally, he would prefer to join an Italian team competing in Europe, and Inter Milan could fill that nicely were they to get rid of Alexis Sanchez.

Tottenham are there, though, and have seemingly just dipped their toe into the water to find out the temperature and discovered it’s a little bit cold at this point.

That can always change, of course, particularly if they’re willing to offer the kind of money that cash-strapped Napoli and Inter Milan cannot.