Nikola Milenković is expected to leave Fiorentina at the end of this season and there’s been various reports over where the defender could end up in the summer.

La Nazione, however, claims the Serie A side’s ‘real surprise’ of the next market could be Christian Kouamé, who is attracting attention from Wolverhampton Wanderers.

‘If anything, it’s curious to discover’ that Wolves are the English club that’s ready to ‘bet strongly’ on the forward.

La Viola initially took the 23-year-old on loan from Genoa in January 2020 and made his stay permanent last summer. The Ivory Coast international has been restricted to only seven league starts and has scored twice in 27 matches.

Kouamé is contracted until 2024 and the ‘next few months will be decisive to understand’ whether or not Fiorentina are ready to give up the attacker. Next season’s manager will also have a say on the player’s future.

Meanwhile, the Italian club like Riccardo Orsolini and he is expected to leave Bologna after this campaign. Fiorentina are ‘serious’ about Orsolini and for this reason, he has delayed his renewal negotiations with his employer.

Bologna value their player around €17m, but the report states there’s a belief a deal can be concluded for €15m. 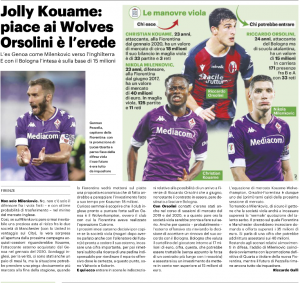 With Fiorentina identifying Orsolini as Kouamé’s possible successor, it could come as a boost for Nuno Espírito Santo’s side.

‘The Kouame-Wolverhampton, Orsolini-Fiorentina market equation is therefore one of the (first) hot topics of the next transfer window,’ states La Nazione.