Giovani Lo Celso to Tottenham has been one of the running sagas of this transfer window, and it’s a story that will go right to deadline day.

The Argentine has been linked with a move to White Hart Lane all summer, but Daniel Levy has refused to pay Betis’ asking price, and that remains the case according to Diario de Sevilla.

The newspaper reports that despite reports that the Spanish club have ended negotiations that is not the case and they are still hoping for a last push from Spurs.

As has been the case all summer, Betis need the money to do their own business, particularly completing a move for striker Borja Iglesias.

The money from the sale of Lo Celso would help them in that regard, as well as finding a new left-sided player following the departure of Junior.

Daniel Levy has made it clear that their latest bid, €52m plus €8m in addons, will be their last, though. In fact, Levy is busy conducting other work, and that includes an al 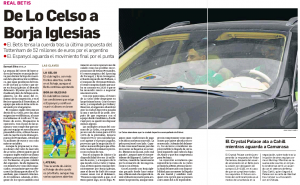 That’s not good enough for Betis as they will lose 23% of that to PSG and Rosario Central, Lo Celso’s former clubs, as well as various payments that will go to the player and his agent.

They’re hoping for a ‘last-ditch’ bid from Tottenham to ‘satisfy’ Mauricio Pochettino, and Diario believe that Lo Celso’s future should be clear in the next few hours. Whether that future is at Tottenham or somewhere else, remains to be seen.