Having realised signing Tottenham Hotspur’s Toby Alderweireld has become even difficult (because Spurs didn’t sign a new centre-back), their attention is now shifted towards Dejan Lovren.

Roma sporting director Gianluca Petrachi has had his eyes set on Liverpool defender for a while.

According to the claims, on Friday, an intermediary commissioned by the Reds was in Italy to negotiate on their behalf for the Croatian.

The Serie A club are looking for a loan deal (€2m loan fee) with an obligation to buy, provided certain agreed conditions are met. Jurgen Klopp’s side, on the other hand, are looking to sell and are demanding €20m.

If they were to buy, Roma would pay €13m and that would be €7m less than that demanded by the Reds.

Roma have sold Mohamed Salah and Alisson Becker to Liverpool in the past two years and are yet to cash on the bonuses. Gazzetta state they are willing to give up part of those bonuses to raise their offer for Lovren.

Lovren is the fourth choice centre-back at Anfield and it’s claimed Klopp wants him either to be sold or tied down to a new contract. 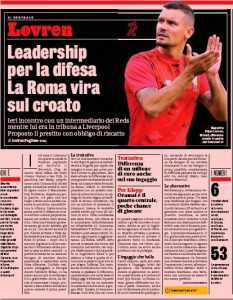 The ex-Southampton man’s wages have also become an obstacle for Roma. Lovren is demanding a four-year deal worth €4m per season, while Roma are willing to offer €3m plus bonuses.

Roma are facing several obstacles to get Lovren’s deal over the line, which is why they are looking at alternatives.