Rafael Camacho has barely left Liverpool and will already have to play against the Reds. Now featuring for Portuguese side Sporting, the winger is set to face his former club in a friendly in New York City this week.

The match is getting some big coverage from the Portuguese press, and today, newspaper Record managed to feature an interview with Liverpool goalkeeper Alisson.

Most of the chat was about Rafael Camacho, with Alisson claiming that he was a great signing for Sporting.

“He is a young man with incredible potential and personality,” Alisson told Record. “He was already showing this at Liverpool by training on an equal basis with the more experienced players.” 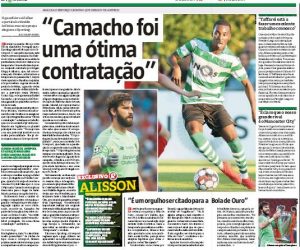 Alisson has spoken about the great season he’s had for Liverpool, and also touched upon claims he could be a Ballon d’Or contender.

“I’ve read a few articles on this and I’m flattered. It’s not common for a goalkeeper to get on this list, and just mentioning my name is a sign that my job is being done well. It’s a pride to be mentioned for the Ballon d’Or.”

The goalkeeper also talked about the recent rivalry with Manchester City, with whom Liverpool have been fighting for titles.

“Our goal is to fight for all possible titles. Of course, Manchester City are a great rival and have won important titles in recent years. However, in England there are several great teams and all are able to fight for the titles.”