In March Sport Witness was informed that interest in Vinicius, the latest Brazilian wonderkid, is increasing.

Arsenal, Chelsea, Liverpool, Manchester City and Manchester United are all interested in the 16 year old, who can’t be brought to Europe until he reaches 18.

Flamengo own the player and are keen to extend his current contract, which has a €30m release clause, and protect themselves from losing Vinicius too early.

Monday’s edition of Marca says that Liverpool, Bayern Munich and Barcelona are all prepared to pay that fee. This has got Real Madrid, also interested, in a panic, and they want a deal tied up before Liverpool, or anyone else, beat them to the player.

It’s a very complicated situation, especially given the player’s age. Any move is going to require a club waiting until Vinicius reaches 18, although at the prices quoted Liverpool wouldn’t find a work permit an insurmountable barrier. 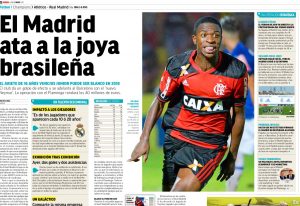 Jurgen Klopp interest is certainly understandable, given that Vinicius is rated so highly, but Liverpool will have to deal with high agents fees and big competition to get a deal done.