Divock Origi was Liverpool’s hero against Barcelona as his second half goal helped his side seal a berth in the Champions League final.

The 24-year-old has scored six goals in all competitions and three of them came in the Premier League, out of which two goals were winners against Everton and Newcastle United.

Het Nieuwsblad claims unless and until the forward scores a ‘cartload of goals’, it will be difficult for him to start regularly under the German’s guidance.

Daniel Sturridge will leave Liverpool once his contract expires in the summer and Origi will climb up the pecking order, but it’s still not sufficient for him to earn a place in the starting XI.

Origi’s contract with the Merseyside club runs out in 2020 and the Belgian newspaper reports Liverpool ‘will now make a proposal’ to retain him at the club beyond the next campaign. 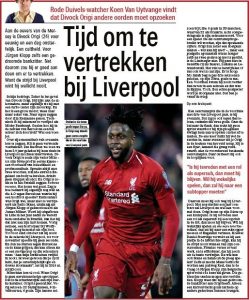 The player will have to make a decision whether to accept Liverpool’s offer and continue as a super-sub or leave them and join another club where he can play regular football.

Following Origi’s heroics, he’s unlikely to be short of options if he decides to leave Klopp’s side in the next transfer window.