When Alex Telles fell on the ground after taking a penalty against Braga, it was pretty clear the Porto left-back was in great pain.

Tests showed bursitis in his right hip, and although the treatment started immediately, he could be sidelined for up to four weeks, which would mean missing both Champions League clashes against Liverpool.

But there’s a little positive news for Porto coming from O Jogo today, as the newspaper reports that Telles is back in training.

The Brazilian is ruled out of Friday’s game against Boavista, but could still be available to face Liverpool on Tuesday. Telles himself is said to be confident about it, and the scenario looks much better than it did a few days ago.

O Jogo writes that the injury is in a very sensitive area of the body. So his recovery will depend a lot on the pain he will feel during these training days. He’s only doing light stuff for now, and has a few days to evolve. 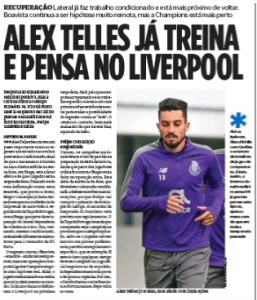 Another return Porto are concerned about is the one of Éder Militão, but for a different reason.

Since agreeing a deal with Real Madrid on a €50m move, the Brazilian couldn’t keep the same level, and lost his place in defence. 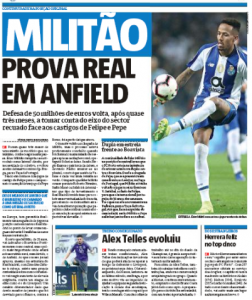 Record writes that even Real Madrid will be watching the Liverpool game to see how Militão ‘reacts to this test of big demands’ by facing the likes of Salah, Mané and Firmino.

Militão’s transfer was almost complete when Zidane took charge of Real Madrid. So if Raphael Varane leaves the club and the Brazilian has a disappointing match against the Reds, then the manager could go for a new defender.