Portuguese newspaper A Bola brings a story today about the interest Rafael Camacho has been attracting from European sides.

With a good season at Sporting, the winger has been calling the attention of clubs from Germany and Italy, whose names are ‘a secret of the Gods’, the outlet says.

And it turns out that Camacho’s former club Liverpool would also like to have a say on his future, according to the report.

A Bola says the Reds keep following the player closely, and when selling him to Sporting last summer, they made it clear they would like to have involvement in his decisions. 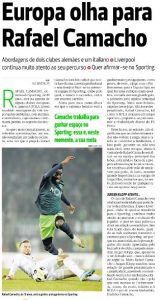 In December, Rafael Camacho’s father has spoken to A Bola and revealed that Klopp even called the player after a goal he scored against Portimonense.

The Portuguese media has already claimed that Liverpool are not planning to sign him back in the immediate future, but since Klopp likes the 19-year-old, he wants to make sure his career takes the right path.