Portuguese newspaper Record has today a piece about Rafael Brito, who’s considered to be one of the most promising players from Benfica’s academy.

The midfielder arrived at the club at the age of 8, and now at 18, he’s been standing out for the U23 and B squads. That’s why the Eagles have just given him a new contract.

But there have been foreign clubs looking to get him, in a list which includes Premier League side Liverpool, the report says.

Along with Barcelona and Real Madrid, the Reds are one of the sides who ‘tried to sign’ him and still have him as a target, although he’s given priority to his renewal with Benfica. 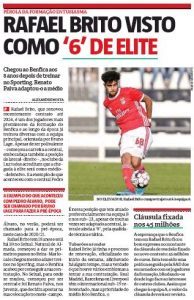 It should be hard to get the teenager now, since his new contract protects him with a release clause of €45m.

And it turns out that the signing should get even harder in the future, because according to Record, his contract and his release clause should be updated once the player gets to the first team.