Turning things around at Anderlecht after a slow start, Lazar Markovic is impressing in Belgium on loan from Liverpool.

Arriving with a lot of fitness issues, mostly due to a lack of game time from doing very little at Anfield, it took time for the Serbia international to wriggle his way into Hein Vanhaezebrouck’s first-team, but he’s slowly but surely managed it.

Scoring his first goal in a 2-1 loss to KRC Genk, the Liverpool loanee once again played 90 minutes at the weekend in the 2-1 away win to Club Brugge, and there’s a good chance he could end up staying at the club beyond the current campaign.

This is what his brother, Filip Markovic, told HLN on Wednesday, revealing the former Benfica starlet ‘wants to stay at Anderlecht’ where he ‘feels fine’.

The Belgium newspaper explain that shouldn’t be an issue with the Jupiler Pro League club, with director of football Luc Devroe, new owner Marc Coucke and the aforementioned Vanhaezebrouck seemingly happy with how things have turned out, meaning it all rests on Liverpool.

This turn of events is a far cry from what HLN described happened in mid-March, when Liverpool rang then Anderlecht director of football Herman Van Holsbeeck to complain about their forward’s lack of playing time.

Needing some attacking reinforcement, the Belgian side plumped on the Liverpool forward in the very last few hours of the January window, mostly because it was cheap.

Down the player’s end, Markovic chose Anderlecht because of advice from his brother, and because he wanted to fight for trophies. 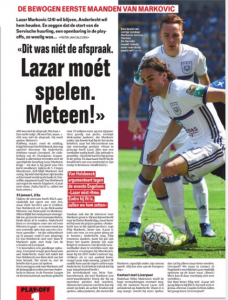 Filip Markovic explained: “In that respect, Anderlecht was perfect. Lazar is proud to play for such a big team. Every time an offer comes, Lazar asks my opinion. I advised him to take Anderlecht, and I have the impression he has listened to me.”

Having only just turned 24, there’s still plenty of time for the Liverpool player to resuscitate his career, and it appears he’s found the right club and the right manager to help him achieve that.

Now, it’s up to Liverpool.