With Liverpool still fighting on all four fronts this season, and likely to do something similar next season, every player is important in the squad.

Jürgen Klopp has made that clear, rotating as much as possible to rest some stars while trying to find the right balance to still win games.

Over at Tottenham, the situation is very different, with a lack of depth almost alarming throughout the squad, which is exactly why Antonio Conte made his requests clear to Fabio Paratici in the January transfer window.

The director of football brought in Rodrigo Bentancur and Dejan Kulusevski to help during the second half of the season, which is exactly what they’ve done, but a lot more work is needed to make the team fully competitive.

One player who has been linked with both Liverpool and Tottenham is Nicolò Zaniolo, with Gazzetta dello Sport reporting the interest of the two Premier League clubs on Thursday.

The Italian star hasn’t had the best season, mostly due to injuries, and there has been a lot of talk about an exit.

However, the idea of a new contract isn’t off the table, as the player requests €4m/year, which AS Roma aren’t against as long as they can structure it in a smart way, based on performances.

Should that fail, however, then ‘it’s really possible that the roads can be split’, meaning the club’s and Zaniolo’s. 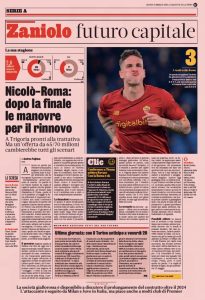 If he were to have a choice, the playmaker ‘would prefer to stay in Italy’, where Juventus and Milan are reportedly keen, waiting ’to understand what will happen’.

That being said, ‘should a super offer arrive from abroad, it would also be difficult to say no’.

This is where both the Reds and Spurs are mentioned, as Gazzetta write ‘At Klopp’s Liverpool, for example, or at Conte’s Tottenham, just to mention two teams that have continued to monitor him for some time’.

Regarding a price, the newspaper believe ‘an offer of €65-70m would change all scenarios’, meaning that’s what the two Premier League clubs need to find if they want to stand a chance at signing the 22-year-old.