It’s been a while since we last had a transfer rumour about Gelson Martins, but the Portuguese press couldn’t let us down for long, and they’ve predictably linked Liverpool again.

Today there’s one more story about his release clause, and it’s newspaper Record who reports it. The article, which makes it to their front page, claims the player ‘won’t have a price’ after the World Cup.

What does it mean? It means that Gelson Martins’ €60m release clause can only be activated until the summer tournament. After that, clubs who want him will have to negotiate directly with Sporting, who are likely to demand a bigger price.

When we started reading the story, we could just guess who would be the interested clubs that would show up this time, since several sides have already been linked to the player in the past. But we got it right, as Liverpool have been the latest who are said to be in the race, and are once again mentioned today. 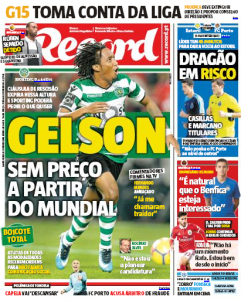 Record claims that Liverpool, Barcelona and Bayern Munich have all been following the player, and for these clubs, ‘€60m would be just a bit more than change’.

There’s a clause in Gelson’s contract which says that if Sporting pay the player €1.5m, then they can increase the release clause to €100m. But that wouldn’t make much difference, since it would expire during the World Cup anyway.

So what Record tries to say is that it’s a good thing for Liverpool, Barça, Bayern, or whoever is interested, to pay €60m for Gelson. Because after that, the price will only grow.

But maybe they forgot just one detail: is Gelson really worth all that? Because this pressure will certainly not make such big clubs work in a hurry.

During the last summer window it was reported in Portugal that Liverpool had offered €50m for the player, which seemed a reasonable price at the time, but Sporting were said to have knocked it back.