With football currently in turmoil, there are still many things that need to be decided, like whether the 2019-20 season will be finished or when the next transfer window will be open.

The last part might not be as important, but clubs will want to strengthen their squads regardless of the current campaign’s outcome, and that includes current potential Premier League champions Liverpool.

However, the Reds aren’t just interested in tweaking what they already have, but would ideally like to make a big signing; one that would likely rock England’s top-tier if they pulled it off: bringing back Raheem Sterling from Manchester City.

According to L’Equipe in France, this is something they are ‘thinking’ about once all the current uncertainties are clarified and they know how much money they have at their disposal.

Should Liverpool get to finish the season and Manchester City’s ban be upheld, it’s stated Pep Guardiola’s side would ‘struggle to retain their jewel’, whom they are currently trying to tie down to a new contract, ‘in vain at the moment’.

The reasons L’Equipe mention for this interest from Jürgen Klopp’s side is that they ‘fear’ an exit from Sadio Mané, whom Zinédine Zidane likes a lot, but also because Sterling wouldn’t be against a return to Liverpool, with one of his entourage confirming as much.

They told the French newspaper: “Even if Raheem is attached to Manchester City, he hasn’t forgotten Liverpool, because that’s where he became who he is as a man and as a player. 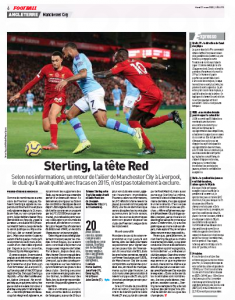 “Of course, there was controversy surrounding his exit, but since then, time has run its course and everything is possible”.

Liverpool isn’t the only club Sterling would see himself at should he leave Manchester City, as L’Equipe also add he ‘more or less openly dreams’ about Real Madrid, which he talked about in a recent interview with AS.

The French newspaper’s bottom line is this: the England international will not stay at the Etihad if the club cannot compete in the next edition of the Champions League, and if he leaves, Liverpool and Real Madrid are two clubs he’d see himself at.