Finally putting an end to a will he won’t he scenario of renewing his contract at Napoli, Faouzi Ghoulam finally put pen to paper to a new deal on Tuesday.

Coveted by Jürgen Klopp and Liverpool, who could really do with a new left-back, the Algeria international took his time to sign on the dotted line, but it seems Napoli finally agreed to his demands.

Helped by the influence of Jorge Mendes, his agent, Ghoulam will now earn €3m/year + bonuses, a considerable improvement on his former wage, but that doesn’t mean a transfer in the summer is out of the question.

One of the main reasons Napoli were so keen to get their defender to sign was because they feared they might lose him on a free in the summer, as the likes of Liverpool would be able to approach him legally for contract talks in January. 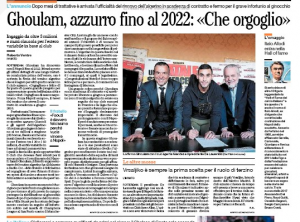 With that now done, Aurelio de Laurentiis knows that if any club wants to sign Ghoulam, they’ll have to pay a considerable sum of money, as a release clause was inserted in the new deal.

According to Il Mattino, the required amount to trigger it will be between €30-50m depending on a variety of parameters, including the stature of the club approaching them and how well Napoli are doing at the time, which corroborates information that had leaked previously in the Italian press.

Our best guess would be that if, for example, a Champions League club (like Liverpool this season) were to approach them for Ghoulam, and Napoli were in the Europa League, the fee would be on the lower end of the scale, while if the situation was reversed, the amount would be higher.