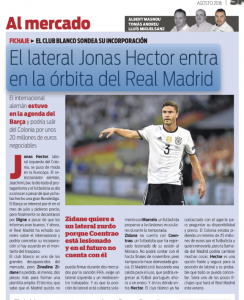 Since claims in June that Liverpool had agreed a deal to sign Jonas Hector, the links have understandably continued.

At the time, German newspaper Bild dismissed the done deal reports, quoting FC Koln’s Jörg Schmadtke as saying: “There is no offer from Liverpool.”

After catching the eye at Euro 2016, Barcelona were then linked to Hector, but club sources told the Catalan press it was absolute nonsense, and Barca went on to sign other options.

Now, Liverpool’s latest rival would be no less than Real Madrid, at least according to Catalan newspaper Sport on Friday. They say Hector ‘enters the orbit’ of Real Madrid, and was a consideration for Barcelona, but they preferred other targets.

Sport reckon Madrid need a back-up to Marcelo, despite Fabio Coentrao returning from AS Monaco. The Portuguese left back is injured, and unavailable until around the end of November, and could leave in January.

It’s claimed Madrid have contacted Hector’s agent to find out how much the player would cost. FC Koln are said to be asking €25m, but the consensus in Germany has been that around €20m could see a deal done.

Sport may well just be stirring the Madrid pot, but if Liverpool retain an interest then it may be wise to get a deal done sooner rather than later.