Carlo Ancelotti knew this, and was also aware that failing to win at home could prove very costly for his own side’s chances of qualifying from the group, meaning he needed his team to turn up, and turn up they did.

Dominating for vast periods of the game, the Serie A side neared the final whistle without finding the back of the net, but a final attack in the 90th minute allowed José Callejon to cross it for an onrushing Insigne, who dutifully slid to get the ball over the line and grab Napoli a deserved win.

With the Serie A outfit never really threatened by Liverpool’s deadly trio, it was Alisson who came to his side’s rescue more often than not, and Gazzetta dello Sport on Thursday have him as the Reds’ best performer thanks to his two saves from Arkadiusz Milik. 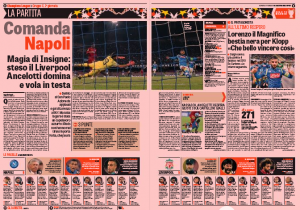 On the other side of the coin, Mohamed Salah never got started, and the Egyptian superstar’s inability to grab the game by the scruff of the neck and make something happen led the Italian newspaper to award him with Il Peggiore, meaning The Worst, and handing him a 4.5/10 rating.

They write: “Recognisable only by his crazy hair, he never managed to accelerate with the ball or even without it.”

Down Napoli’s end, it was Allan who was awarded man of the match with a hefty 8.5/10, thanks to a performance deemed ‘exceptional’, while Nikola Maksimovic was given the lowest rating of 6.5/10, the same as Liverpool’s best performer, their Brazilian goalkeeper.

All in all, a day to forget for Jürgen Klopp, whose Liverpool side, this time around, were deemed too ‘fearful’.