Liverpool beat Atletico Madrid 3-3 on Tuesday in a match that was a thriller to watch.

Jurgen Klopp’s men burst into a 2-0 goal lead and then the Spanish side fought back brilliantly, levelling the scores, and deservedly so, thanks to two strikes from Antoine Griezmann.

The Frenchman was then sent off, and whilst that obviously hampered Diego Simeone’s men, they continued fighting and were very much still in the match. Mohamed Salah then converted a penalty late on, before Atletico were awarded their own… only for VAR to then overrule that after a prolonged delay.

Atletico feel they’ve been treated harshly, but Liverpool won’t care much. The referee involved is getting a hard time in the Spanish media on Wednesday, yet he’s not the only one.

In their match ratings, AS hand out two zero marks. One to Mario Hermoso, who so clumsily gave the penalty away, and another to, wait for it, Virgil van Dijk. 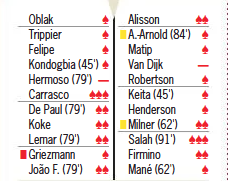 From what we can see, they’re the only Spanish newspaper to have rated Van Dijk so low, with Mundo Deportivo feeling he was the best of an average bunch when it came to performances from Liverpool’s defenders last night.

Marca, however, do point out that whilst Van Dijk is, without question, one of the best central defenders in the world, Griezmann very much had the better of him for much of the match.