The rumours first started in England, and now it’s the Portuguese press who claims that Sporting are interested in the Liverpool youngster Pedro Chirivella.

Newspaper O Jogo writes today that the Lions have many midfield targets, and the 21-year-old is one of them.

As Chirivella can play as a defensive and central midfielder, the outlet compares him to William Carvalho, who left Sporting for Real Betis this summer, saying the Liverpool player has ‘good technique, passing quality and tactical knowledge’.

Although O Jogo doesn’t say how much Chirivella would cost, they call him ‘affordable’ for Sporting. For those who aren’t used to the Portuguese press, we’ll translate: that should be something close to zero. 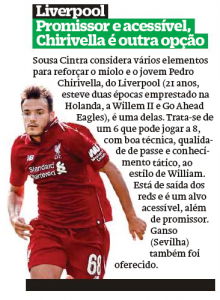 Chirivella joined Liverpool’s academy on a €2.3m move from Valencia back in 2013.

The player has had two loan spells in the Netherlands, at Go Ahead Eagles and Willem II. He’s made five official appearances for the Reds, all in the 2015/16 season.