In their Friday edition, German newspaper Bild have an article on several Bundesliga transfers this summer, and the clauses which will impact on them.

First up is Naby Keita, with the RB Leipzig midfielder moving to Liverpool in the summer window. That’s all agreed, the deal will be happening, Keita will be a Red, but the fee isn’t yet set.

Keita had a buyout clause this summer of €55m, but Liverpool didn’t want to wait and agreed a deal with Leipzig and the player last summer. That deal will see Liverpool pay between €65m and €75m for the midfielder.

RB Leipzig get the full €75m if they qualify for the Champions League. Currently fifth and four points behind Borussia Dortmund and Bayer Leverkusen, that’s not looking likely… saving Liverpool €5m.

If Leipzig qualify for the Europa League, then it’s €70m. Two teams qualify from the Bundesliga for the competition, those finishing in fifth and sixth place. Currently fifth, Leipzig are only a point clear from seventh. 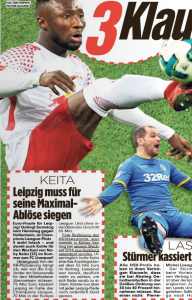 However, and stick with us here, the winner of DFB Cup also gets a place, but if they have qualified for Europe through the league, that means seventh place in the Bundesliga gets the spot instead. The DFB final is in May, between Bayern Munich and Eintracht Frankfurt.

Bayern are top, naturally, and qualified anyway, and Frankfurt are seventh. Given Borussia Monchengladbach in eighth are seven points behind RB Leipzig, Europa League football looks close to being secure.

Reading make approach for two midfielders from same club – Could...

Arsenal have ‘swooped in’ for defender – Competition need exit before...

Clubs taking an interest in Huddersfield forward – One has ‘tested...