Marko Grujić was supposed to be staying at Liverpool this summer, following his return from loan at Hertha Berlin.

In mid September, the player’s agent Fali Ramadani told Kicker: “Liverpool want to keep Marko. That could change in January at the earliest.”

Things have changed a lot more quickly than that, according to this week’s edition of Kicker. The German magazine explains Grujić has changed agents, and Liverpool have now ‘signalled to interested parties’ that they’re ready to sell the midfielder, and are looking for a €20m+ transfer fee.

The article explains Hertha Berlin still have the player on their agenda, however, he’s not currently their priority. The Bundesliga club are likelier to bring in loan players if they make signings before the window closes on October 5th.

Unless Liverpool change their stance, and are ready to accept another loan rather than a 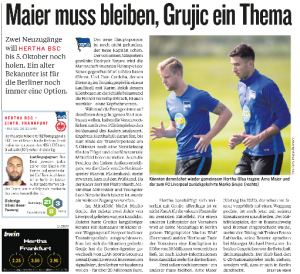 permanent transfer, then a transfer looks to be out of Hertha’s reach.

Grujić, who is now 24-years-of-age, has a contract at Anfield lasting until June 2023, so a loan is feasible if no club arrives with the €20m.