Liverpool loanee Marko Grujic is featured in big a story from Portuguese newspaper A Bola today.

The outlet highlights the turnaround the midfielder had at Porto this season, as despite going through a discreet start with the Dragons, the 25-year-old has now had four straight starts and has been changing the way the club looks at him.

Grujic had the chance to prove himself in the games against Chelsea in the Champions League, and following the compliments from Porto manager and fans, the club should now consider making an effort to get him signed permanently.

A Bola writes that Grujic is a player who Liverpool tend to negotiate at the end of the season, but the problem for Porto is that the Reds aren’t expected to let him go for less than €10m.

Since the idea of signing him permanently is new, there’s no information on any contacts made by Porto so far. 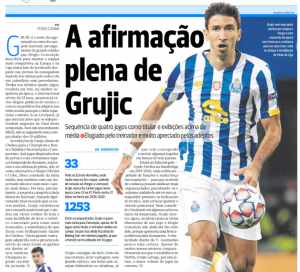 A Bola spends the rest of the story explaining how the midfielder managed to earn his place at the Portuguese side in the past month.

Liverpool signed Grujic on a €7m deal from Red Star back in 2016.

Since then, he’s had loan spells at Cardiff City, Hertha Berlin and Porto.

His contract with the Reds expires in 2023.