When reading stories the Portuguese media has been featuring about Marko Grujic, it feels like we’re about to enter a small saga regarding his future.

Loaned by Liverpool to Porto until the end of the season, the midfielder had a discreet spell with the Dragons at first, but his recent appearances have made the club consider signing him on a permanent move.

Newspaper O Jogo features a story today saying this is a ‘patience game’. They claim all parties involved want to check their options before taking any decisions.

On Liverpool’s side, there’s the fact the Reds want to take the opportunity of making some profit with the player. Following his €7m transfer back in 2016, this is the first real chance the Reds have to multiply the amount spent and would demand between €15m and €20m for him in the summer. 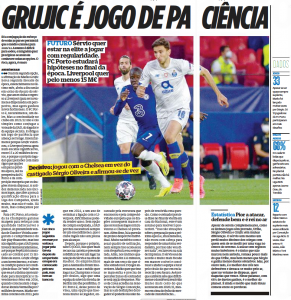 Meanwhile, Grujic also wants to check on the possibilities he has, especially because Porto are still to guarantee a place in next season’s Champions League. Still, the player is happy at the Portuguese club, as that’s a place where he can fight for titles and take part in the European tournament, unlikely his past loan destinations.

So with both Liverpool and the player putting the transfer on hold for now, we’ll probably be seeing many stories on Grujic’s future until Porto finally attempt his signing in the summer.