The rumours linking Iker Casillas to Liverpool continue to get a lot of attention in Portugal, even though none of the local outlets seem to have much to say about the case.

This Thursday, A Bola, O Jogo and Record all had stories about the goalkeeper, but none of them come with some breaking information.

A Bola is the only one who doesn’t credit other sources, and claims that the Anfield side has been ‘seducing’ the Spanish goalkeeper.

According to the newspaper, Liverpool have joined a long list of clubs who are keen on Casillas, and have done it right after the goalkeeper’s performance at Anfield in the Europa League. 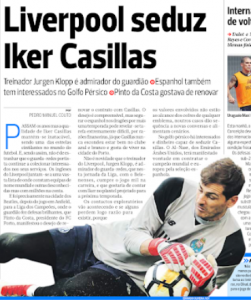 A Bola writes that it’s no secret  Jurgen Klopp is a big fan of the Spaniard, and even though Porto will try to hold him, it will be hard for the club because of this auction going on.

One of the competitors for Liverpool would be Al-Nasr, from the UAE, who also have enough money to attract Casillas out of Portugal.

But it still looks like this story is being carried away by reports that aren’t that reliable. A Bola may know something about Al-Nasr, but the Liverpool claims still sound very shallow.