We’ve read five Portuguese newspapers today so far, and all of them have at least a short story on Sporting fullback Nuno Mendes.

One of the reasons to talk about the youngster is the fact he’s missing the weekend’s game against Famalicão, and the other is his contract situation with the Lions.

As the Lisbon club try to give the 18-year-old a new deal, the local press continues talking about the interest from European giants, especially Liverpool.

Although most newspapers just give the Reds a mention, outlet O Jogo brings an interesting paragraph claiming Jurgen Klopp’s side have already tried to sign Mendes. 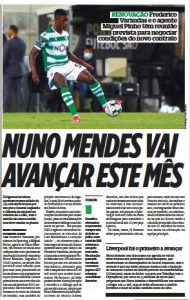 They say that before signing Kostas Tsimiskas in a €13m deal from Olympiacos, they asked for Nuno Mendes and were ready to spend €22m on the signing. Sporting, however, backed off and stopped any chances of a transfer.

Nuno Mendes is currently protected by a release clause of €45m, but there’s optimism that a new deal will be signed this year, and there’ll probably be a new price tag on him.

The Reds’ interest is also mentioned by newspapers A Bola and Record. But they aren’t alone in the race, since the likes of Inter Milan, Juventus and Manchester United are all named as well.