Earlier in February, we covered claims from WESER-KURIER that Liverpool are interested in Milot Rashica.

The same newspaper also explained Southampton have ‘written down’ their interest in the Werder Bremen winger and he views the Saints as a stepping stone to joining a bigger club.

This week’s edition of SportBild claims the Reds and Ralph Hasenhüttl’s side are looking to secure the Kosovo international’s signature.

The interest from these two clubs is mentioned again and apart from them, RB Leipzig are also keen on the 23-year-old.

It’s claimed the player’s preference is to either continue in the Bundesliga or make a switch to the Premier League.

Werder Bremen will have to raise money by opening the exit door for their star players and the attacker is the ‘top candidate’ to leave the club.

Rashica has a buyout clause of €38m valid until June 15th and the price will be reduced to €18m if the German side drop to the second division. 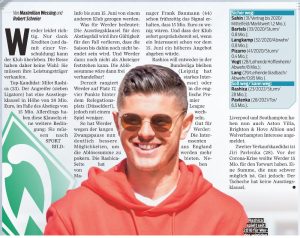 It’s unclear if and when the season will resume due to the global health crisis.

If Werder Bremen avoid relegation on or before June 15th, they will be free to negotiate a fee for the wideman’s sale.

With the two English clubs interested in Rashica, Jürgen Klopp’s side will have to battle it out with Southampton for his signing.