Back on Wednesday, Portuguese newspaper Record had a story saying Sporting have reached an agreement with Nuno Mendes’ staff for his new release clause.

As they negotiate a new contract, one of the most discussed points had been settled, which is to raise the clause from €45m to €70m.

Now even though only Manchester United had been mentioned as potential bidders for the player, today there’s the inclusion of Liverpool in this race.

Record has another article, this time claiming Sporting want to close the fullback’s renewal before the end of the year. 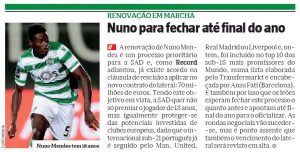 Then when speaking of the clubs who are interested in Nuno Mendes, they list Liverpool, Manchester United and Real Madrid.

The player has just been included in Transfermarkt’s list of top 10 youngsters in the world, and that’s one more reason why Sporting are looking to protect him.

Even though Liverpool have been linked to the fullback for a while now, we’re still to see reports about a serious move from the Reds.