Ferran Torres came up through the ranks of Valencia’s academy before being promoted to their first team in 2017.

The 19-year-old mainly operates on the right wing, but hasn’t managed to find the back of the net regularly.

However, that hasn’t stopped him drawing attention from clubs like Liverpool.

This is according to SportBild, who claim the Champions League winners are chasing the Spaniard and are providing serious competition to Borussia Dortmund.

The report adds Barcelona are also in the race for the player. 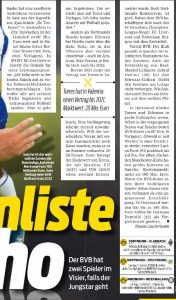 Torres’ contract with the La Liga side runs down in 2021 and there’s not thought to be an extension on the horizon. SportBild believe Valencia would look to sell him for €20m next summer.

If the teenager swaps Valencia for Liverpool, he could struggle to find a place in the Reds’ starting XI, fighting with Mohamed Salah for a place on the right wing.

Liverpool interest being pushed may be simply an effort to dramatise the situation.