After months of contract renewal talks, it seemed like Lazio were ever so close to tying down Stefan De Vrij to a new deal last week, but Il Messaggero on Wednesday say that isn’t the case.

Apparently agreeing to a €25m release clause that would make him an easy target to most clubs, much to Lazio’s annoyance, propositions from other clubs, including Liverpool, are making him stall.

Pondering whether or not to agree to Lazio’s £50k/week (bonuses included) offer, the Dutch defender knows full well that, were he to leave on a free in June, he could earn a lot more elsewhere.

After all, with no transfer fee, Jurgen Klopp’s side would be able to offer him far more enticing wages than what the Serie A club currently have on the table for him. 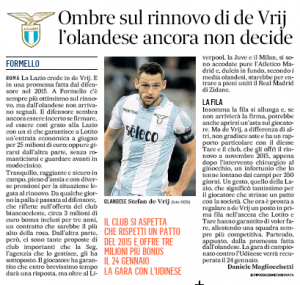 And Liverpool aren’t the only big European team after De Vrij, with Juventus, AC Milan, Atlético Madrid and even Real Madrid all mentioned by Il Messaggero.

The Holland international has told Lazio he will give them an answer ‘soon’, whatever that means, so I guess we’ll know, well, ‘soon’ what the decision is.

If we reach December without a new contract signed, those in charge of transfers at Liverpool might need to start warming up their printers to fax over that deal.

Yes, even in 2017, everything still seems to be done by fax.