Standard Liège and Club Brugge are looking to bring in a new goalkeeper in the summer because Guillermo Ochoa (33) has over a year left on his Standard contract and Brugge’s Ethan Horvath is attracting interest from England and Germany.

Het Laatste Nieuws claims the two clubs have turned their attention towards Mouscron’s Jean Butez, who is available for €3m.

Simon Mignolet’s name was mentioned at Club Brugge. Amid interest, the Liverpool goalkeeper’s agent has ‘communicated’ the asking price and current salary level.

It’s claimed around €5m is needed to complete the transfer, and that Mignolet earns about €100k, with the wages figure potentially flexible.

For Brugge, the financial demands make it extremely difficult to complete the transfer, even if a gesture was made to lower salary.

The 31-year-old has made one start in the League Cup and another in the FA Cup and the Merseyside club ended up suffering defeats in both fixtures.

Another report from HLN explains the shot stopper wants to have more minutes, which is why he wants to leave Jurgen Klopp’s side in the summer. 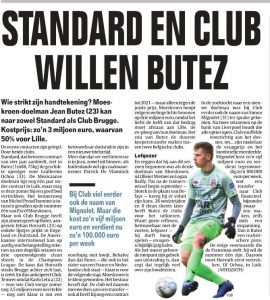 From his side, the goalkeeper is ready to take a pay cut and has kept all options open. Mignolet wants to join an ambitious club where he can become the first choice stopper.

That club also needs to be able to afford the transfer fee. Perhaps the €5m estimate is a little on the low side.