Just days after Liverpool lost to Real Madrid in the Champions League final in May 2018, they agreed a fee with AS Monaco for Fabinho.

A year before he joined the Reds, Paris Saint-Germain were keen on securing the services of the Brazil international and it’s been a long standing issue.

The midfielder has given an interview to L’Equipe, published in today’s edition of the French newspaper, and explains how close he came to joining Les Parisiens after holding talks with their sporting director Antero Henrique in 2017.

“In fact, if I had to sign at PSG, it’s the year before it could have been done [2017]. They were very interested, I talked a lot with Antero and the club’s leaders, but it didn’t work. The year after, I did not wait for them… And then, I thought it was time to leave France,” Fabinho explained.

At the Merseyside club, Jurgen Klopp didn’t use him initially and that led to speculation Fabinho could leave Anfield and join PSG on loan in the winter market.

These reports started to surface before Liverpool’s Champions League clash against Thomas Tuchel’s side.

The midfielder has suggested there were dirty tricks at play, because he experienced a similar situation during his time at Monaco.

“I never thought of going elsewhere. I know a lot of things were written in the newspapers, but it wasn’t true. What’s funny is that this PSG loan story came out just before our Champions League match (1-2, November 28, 2018),” he explained. 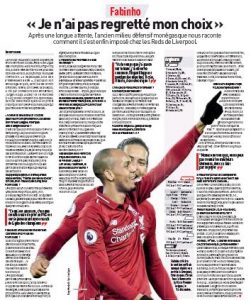 “And I had already experienced a similar story the day before the final of the Coupe de la Ligue between PSG and Monaco (3- 0, March 31, 2018). It’s a strange coincidence, is not it?”

One thing is clear, and it doesn’t come as a surprise, Fabinho is going nowhere anytime soon.