Kamil Grabara return to Aarhus Gymnastikforening (AGF) for the second time after the Danish side agreed for his loan transfer with Liverpool last summer.

The goalkeeper is currently enjoying a good run in recent months form after struggling in the first half of the season, and in particular, during October and November.

He was heavily criticised after AGF suffered a 3-1 defeat at the hands of FC Nordsjaelland back in November.

Danish newspaper Jyllands-Posten interviewed the Reds owned player, where he revealed he received several interview requests when he was struggling earlier in the season.

“I was invited for many interviews during the period when I was making mistakes. But now suddenly not many people want to talk to me,” he said.

“It’s part of the goalkeeping game that it always gets in the headlines when they make mistakes. I understand that the spotlight came on me after these mistakes because I had delivered at a high level in my first stint at the club.”

The custodian doesn’t want to give any excuses for the dip in his form and details how he managed to change his form.

“I went deeper into myself and focused more on my own game and tried to stay focused rather than think about everything else,” the Liverpool man explained.

“Maybe the problem was that I wasn’t focused enough. I thought I had enough focus, but maybe I didn’t. I may have been focused during the games, but not enough during the week. Something didn’t work in my preparation for the games.”

Last week, Grabara gave an interview to Tipsbladet, explaining that he’s in regular contact
with the Premier League winners. 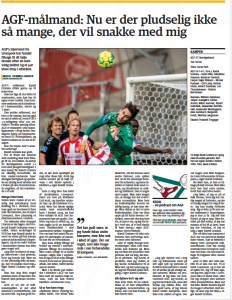 He will have to return to Anfield once his loan deal with AGF expires. The keeper isn’t ready to talk about where he will play next season.

“It’s not the right moment to talk about it. We’re in the middle of the season, and we’ve got everything to play for,” the Pole stressed.

“I won’t say whether I think I’m here, in Liverpool or somewhere else, or if I’m quitting my career after the summer break. You don’t know. Maybe I thought too much in the fall. I have no idea.”