It’s interesting how things have completely turned around since the Portuguese press started reporting Rafael Camacho’s transfer from Liverpool to Sporting.

At the end of the last week, it looked like the deal was done. It was first said that the player would join the Lions on a six-month loan, which could be extended for a further year, and the Portuguese side would have a €15m buying clause.

Now today, Record brings a big story saying it’s Jurgen Klopp who will have the final word on the transfer. Camacho is expected to talk to the manager today, and listen to his decision.

The German boss is said to be a big admirer of the player, and liked his debut against Wolves on Monday. 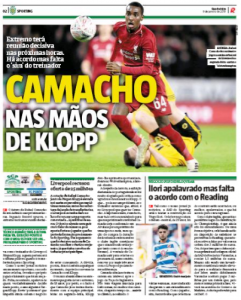 The newspaper even says that a €25m bid for Camacho was rejected before the transfer window opened.

That revokes one more of the old claims: the buying clause. Record now claims that there would be no way Sporting will have a chance to get Camacho permanently after the loan spell.

And finally, the length is also put into doubt. The newspaper says the loan would initially be of one and a half seasons, but if Liverpool think the player is not being used as much as hoped for, they can cut it short and bring him back to Anfield next summer.