As Marko Grujic enjoys preseason with Liverpool, he’s also said to be waiting to see what will happen to him in this transfer window.

The Portuguese media today writes once again that the midfielder isn’t in Jurgen Klopp’s plans, and the Reds should soon come up with a solution for him.

Porto, who had Grujic on loan last season, continue to be pointed out as the main suitors for his signing, even though they seem to struggle with the demands made by Liverpool.

Newspaper A Bola claims that the Reds want €17m for the transfer, and will accept the offer from whoever gets closest to that price. 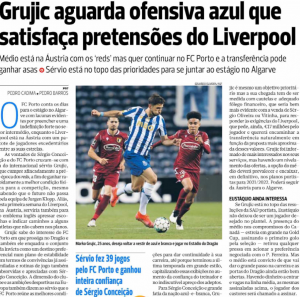 So even though Grujic would give his priority to Porto, since he’d be well adapted to the club and to Sérgio Conceição’s management, the Dragons must still find a way to convince Liverpool of an agreement.

A Bola claims that the midfielder ‘was informed’ that several clubs are interested in his signing, although it’s really only Porto who are named in the story.