With the Champions League final now over, Divock Origi can fully focus on what happens in his career after Liverpool.

The Belgian has long been linked with a move to Milan, but it appeared he was waiting until after the decisive game against Real Madrid to unveil his next destination and finalise everything.

Gazzetta dello Sport explain that out of all the dealings the Serie A side are trying to pull off, the Liverpool player’s is ‘the most mature’.

In fact, it’s stated ‘the Rossonery managers have defined the details of the €4m net per year deal in the last few days’, with the belief that Origi ‘could land in Milan and undergo medical examinations as early as this week’.

They point out the Liverpool forward ‘is impatient to start a new experience before going on vacation’, and ‘everything is set up for this transfer’ in Milan, with it all starting from the ‘first fruitful contacts with the player’s entourage’ back in January. 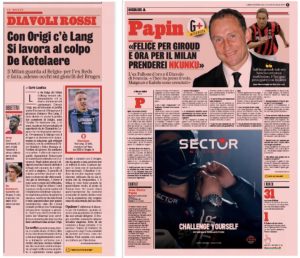 Villarreal are said to have come in with their own offer at the last minute, reportedly ‘with a higher economic offer’, but that ‘did not change the Origi clan’s mind’.

As for whether the transfer will be a good one, Ballon d’Or winner Jean-Pierre Papin was asked about it in an interview with Gazzetta.

He replied: “He’s a good player, with experience at the highest level, but there’s a need for more at Milan… I am thinking of Christopher Nkunku of Leipzig. He’s fast and effective in front of goal: I would see him do very well with Stefano Pioli.”