On Monday, we covered an interview that Liverpool midfielder Marko Grujic gave to the Serbian press talking about his past and future.

The 25-year-old claimed to be happy with the season he’s just had on loan at Porto, and said he sees himself playing at the Estádio do Dragão again in the future.

Well, of course that was enough for most Portuguese outlets to cover his quotes today. And newspaper Record features a story explaining the Dragons’ plan to sign him from Liverpool on a permanent move this summer.

Porto have just lost Mateus Uribe due to injury, and since Grujic plays in the same position and has just claimed he’d like the move, that’s a reason for the club to ‘accelerate’ his signing. 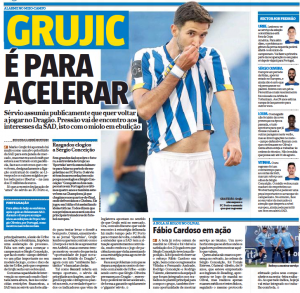 Record says the only way the Dragons would get a chance to buy Grujic from Liverpool is in case Jurgen Klopp doesn’t count on the player for next season, and ‘all the indicators’ from England are showing exactly that.

So even though the Reds had initially demanded €17m, Porto had been playing a ‘patience game’ to get a better deal. Now with this need to finally move, there could be an outcome for his case very soon.