Despite focusing a lot of their attention on trying to get Ozan Kabak from Stuttgart, Milan failed to acquire the young Turkey U18 international, who stayed in Germany to move to Schalke 04 instead.

From that point onwards, the Serie A side started looking at alternatives on their defensive reinforcement wishlist, where a certain Dejan Lovren has been highlighted.

Needing, and probably wanting, first-team football at 29 years of age, it isn’t a surprise to see Lovren’s name linked elsewhere, and we’ve already covered a few articles on a potential move to Italy over the past month. 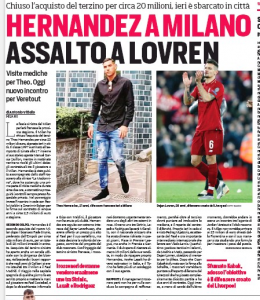 Corriere dello Sport on Tuesday explain that following the Kabak disappointment, Milan want to ‘concentrate on the expert defender’.

The Italian newspaper state the Liverpool man is now the Serie A side’s new ‘objective’, which suggests we could see some movement in the coming days in this one.

Contact between Milan and Lovren’s agents has allegedly already taken place, so we’re guessing there was enough hope of an agreement for this to get done should the situation arise.