Whilst we’re most used to the Spanish media pushing Real Madrid and Barcelona forward for impressive signings, in recent weeks they’ve also been pulling the two clubs back from potential deals in the summer window.

Erling Haaland is a good example of that, with repeat claims that both clubs are keen, but certainly not leading the pack for the Borussia Dortmund striker.

The same is now the case with Aurélien Djani Tchouaméni. Marca continue to push a move for the midfielder, and in their newspaper edition, say Liverpool are ‘placed in the lead’ along with the two Manchester clubs.

Real Madrid had been keen, but aren’t set to push forward and get themselves into a bidding war, leaving the road more open for clubs like Liverpool. 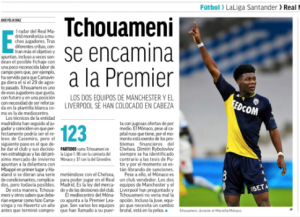 Tchouaméni is a 22-year-old midfielder currently playing for AS Monaco, where he has a contract in place until June 2024. On Sunday, he was part of the Monaco side which beat PSG 4-0, and is inevitably winning fans.

There’s no indication of what Liverpool would have to pay, just that they’re in the pack leading the race and have made contact.