On Monday we covered a claim from Catalan newspaper Sport that Jasper Cillessen is seriously considering leaving Barcelona this summer.

Back-up to Marc-Andre Ter-Stegen, the goalkeeper is looking for more prominence elsewhere, having become tired of sitting on the bench so much.

It was claimed that Cillessen has offers from two clubs and if the Liverpool one is concrete (with the other club not named) then he’ll ask Barcelona to let him leave and become first choice for Jurgen Klopp at Anfield.

Tuesday’s edition of Sport follows on from that and says Barca are willing to ‘facilitate a transfer’ if it’s good for both the player and Catalan club.

Whilst Sport say the La Liga champions want an offer in excess of €30m, there’s surely a possibility Liverpool could do a deal a little below that.

Barcelona rate Cillessen highly, it’s explained, but ‘understand his ambition’, and it’s reiterated the player has offers from two clubs. Barca themselves are yet to receive an 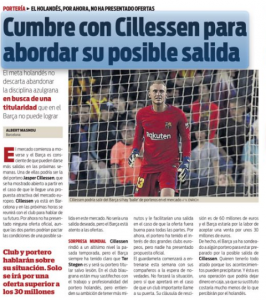 official offer, and it’s that which is awaited if a transfer is to happen.

Liverpool are by far and away the club most linked to Cillessen and over the past month there’s been a Catalan article pushing Anfield interest at least several times a week.

Now would be the time for action.