Yes, that’s the same Italian player whom Roma are reluctant to sell and would cost a fair bit of money, but when it comes to needing cash, where better to try and get it than in the Premier League.

Tuttosport are the ones reporting this on Thursday, claiming Liverpool are ‘hot’ on the youngster’s trail, even if the Serie A side ideally would want to keep him around.

AS Roma, who have been affected by the Covid-19 pandemic, are going to try and get rid of a number of players on hefty wages this summer, with names such as Juan Jesus, Javier Pastore and Steven Nzonzi all prime expendables, but doing so isn’t easy.

That means they might have to get sell some more valuable assets, like Cengiz Ünder or Patrik Schick to make the money.

However, if they fail to manage that, then it’ll be Zaniolo’s turn, as they know he is a player likely to immediately attract suitors if put on the market. 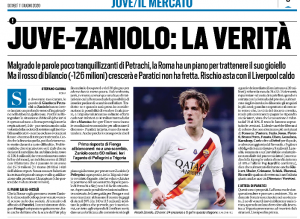 That’s where Liverpool come in, as AS Roma’s stance about their starlet could change as the summer goes on, and it’s the Anfield side ‘in particular’ who would be keen outside of Italy.

Juventus are their prime competition, but with Paulo Fonseca’s side not listening to cash offers ‘below €60m’ should they decide to sell, it’s a difficult situation for Italian clubs.

For Premier League sides, on the other hand, that’s a different story.

Frankly, we’ll believe it when something happens, because we all know Liverpool’s stance on big transfers this summer, at least publicly, but that could always be revised if the right player comes along.

Whether Zaniolo falls in that category, however, remains to be seen.