It looks like Sporting’s negotiations to sign Rafael Camacho from Liverpool are getting to an advanced stage.

Portuguese newspaper Record brings a story today claiming that the deal is ‘practically concluded’, as the player could soon be signing a five-year deal with the Lions.

With the winger excited to return to his former club, Sporting and Liverpool are now said to be discussing the transfer fee and the contractual clauses.

Record claims that the Reds started by demanding €10m for the sale, but now accept much less, as long as the Lisbon side give them a percentage of a future transfer, and a buy-back option. 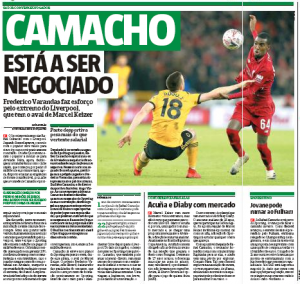 As Sporting are willing to pay €5m or €6m for Camacho, Liverpool want to keep 20% of a future transfer. None of the requests seem to be a problem, especially because the Reds are respecting the player’s wish to join a club where he’ll play more.

It’s once again claimed that Camacho refused to sign a new contract with Liverpool, and when negotiating a deal with Sporting, along with his father, he’s been showing he’s not worried about money, as all he wants is to play more.