Lille striker Victor Osimhen has broken off talks with Liverpool about a move to seal a transfer to Napoli.

That’s according to L’Equipe, who report on the striker’s situation today and a significant development in his proposed switch to Naples.

Osimhen is hot property this summer after scoring 18 goals and registering six assists in all competitions for Lille this season.

A whole host of clubs have been linked with his signature, including Liverpool, with it claimed at the beginning of the month that Jürgen Klopp was ‘very interested’ in the striker and his €80m value wouldn’t be a problem for the club.

There have been no more rumours since then, and it appears there won’t be with L’Equipe reporting Liverpool are out of the running.

They explain that Lille are ‘preparing’ to sell Osimhen to Napoli after something of a leap forward in negotiations last night.

While the transfer is not yet ‘registered’ and talks were continuing today, there is a feeling the transfer has been ‘partly decided’ this week after Osimhen met with Lille’s Gerard Lopez and Napoli’s Cristiano Giuntoli last night to ‘begin concrete negotiations’.

That meeting followed the striker’s decision on Friday ‘not to continue’ discussions with other clubs, a move that was to the ‘detriment of Inter and Liverpool in particular’. 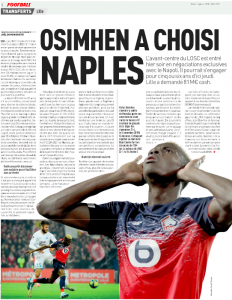 They explain that a meeting with Gennaro Gattuso, who has offered to lower his own wages to finance the move, was a ‘definite win’ in their efforts to convince Osimhen to join.

Napoli have essentially rolled out the red carpet for him over the last few months, and the player has chosen to avoid a move to a ‘top five’ club in Europe.

Instead, he is going to pick one that would ‘make him play’ and whose ‘exposure’ would allow him to aim for a bigger club in the future.

That, inevitably, ruled out Liverpool, who can offer no guarantees of playing time given the current level of their front three.

Indeed, it’s why they also turned away from a move for Timo Werner, and it seems it will end up being a problem they’ll have to work around to strengthen the squad moving forward.